The Startup Padel Tour is a by invitation only get together, where startups and investors compete on the court and socialise off the court. We combining the addictive pleasure of Padel with having fun and enchanted conversations amongst a unique group of people.The Startup Padel Tour is organised during large tech events in various cities (e.g. TNW, WebSummit, WMC), followed by a buzzing party, dubbed Balls, Beers and a bit of BusinessNext up... Amsterdam (during TNW).A concept by Patrick de Laive and Robert Jan de Laive

In February 2022, during the Mobile World Congress, the Startup Padel Tour lands in Barcelona!
With a thriving tech scene of startups and positioned in the heart of European Padel, this is going to be funtastic.We start with padel and end with a party. The Startup Padel Tour is directly followed by Balls, Beers and a bit of Business, an invitation only work hard, play hard party. Think music, great people, beers and a buzzing vibe.What you need to know before joining the Startup Padel Tour:
- Team: We only have room for 16 teams. A team consists of 2 players. Players have to work in the tech scene (startup, scaleup, investor or innovation of corporate).
- Team name is equal to the company name (if both players represent a different company, flip a coin to decide which company you'll represent).
- Outfit: Company Swag.
- Audience: Yes! Sign up for Balls Beers and a bit of Business and you'll have access to the venue, also during the Startup Padel Tour. 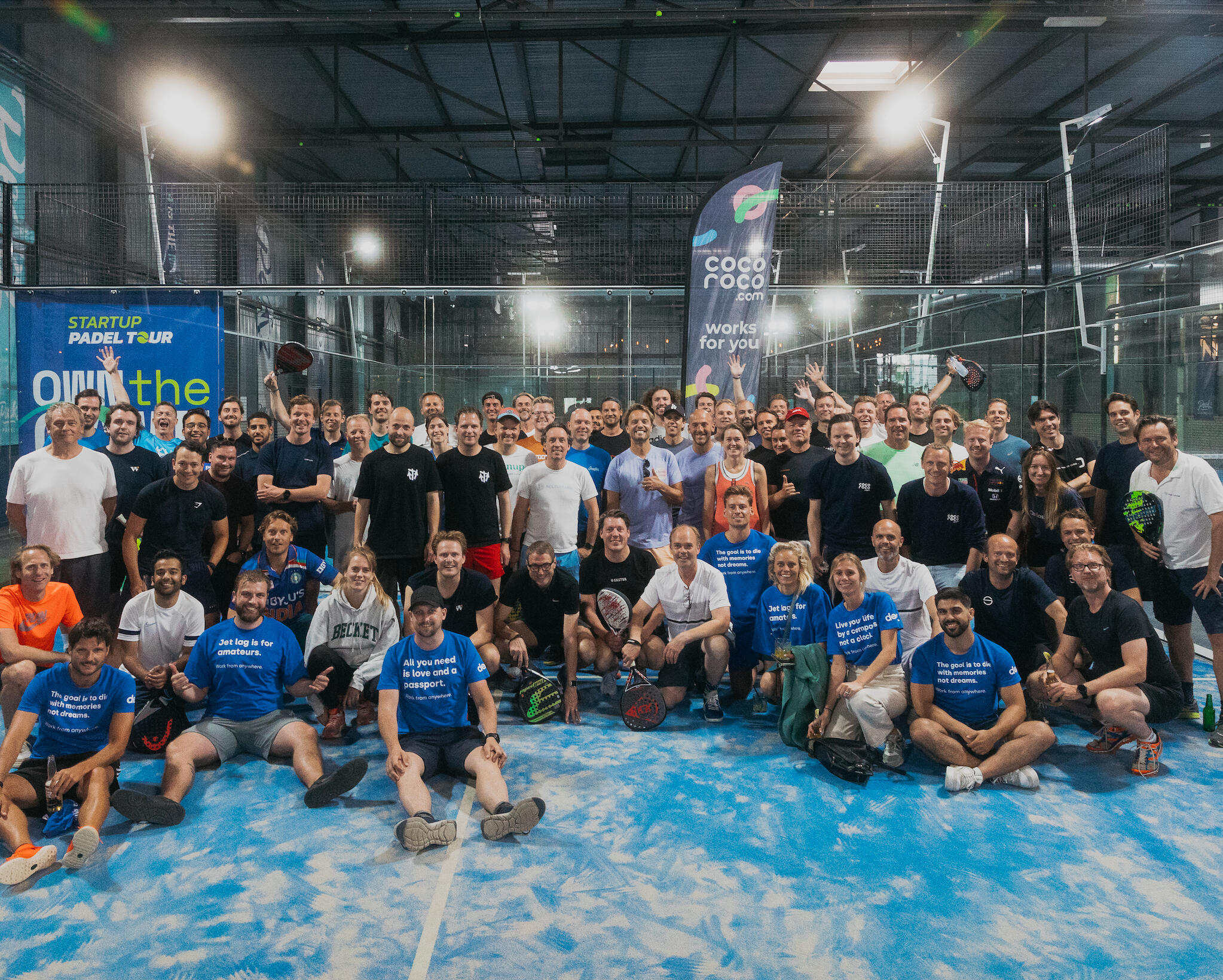 We're getting ready for the 3rd edition of the Startup Padel Tour on June 15th (right before TNW Conference). Our Flagship event in Amsterdam is set to become an unforgettable one. High quality people, mucho fun, and a must attend party.Some changes to the concept:
- The padel tournament is by invitation only and has limited capacity.
- Max 1 team per company / fund
- At least 1 founder or partner per teamThe tournament will be followed up by an unforgettable party starting at 8pm until .... late)Previously joined by: Twitter, OpenUp, Dutch Founders Fund, INKEF Capital, Shypple, Returnista, Outfunnel, Peak Capital, Keadyn capital, Rocket X, Transferz, Inner Circle, Curiosity VC, TNW, Crisp, BFly Ventures, uFuture, Helloprint, Slingshot Ventures, Henq, AccelerAsia, Cocoroco.Want to play padel, join the party or sponsor? Ping Patrick or Robert Jan

The Startup Padel Tour Lisbon was a blast.
What an amazing venue and a great lineup of teams, eager to show off their skills and socialise.A big thank you to Cocoroco.com for sponsoring the 'beer and other stuff you can drink while playing padel'.Winners of the Pala d'Oro at the Startup Padel Tour Lisbon: TNW (The Netherlands)Attending companies: AccelerAsia, WE.VESTR, weWow, Cocoroco, Techleap, Beta-i, Payaut, Kwerty, Feeder, TNW, Beat Lock, TagpeakOn to the next one! Barcelona, here we come! Want to join? Ping Patrick or Robert Jan

Startup Padel Tour -> How we play

The rules are simple:
- Team: A team consists of 2 players. It's allowed to bring a 3rd player and rotate. Players have to work in the tech scene (startup, scaleup, investor). At least 1 team member is a Partner (VC) or founder/CxO (Scaleup)
- Match: Each match has a fixed time including warmin up time. We count the games (no sets). If at the zoomer the score is equal, you play a golden point for the match.
- Score: Winning a Match gets you 3 points. Winning with more than 4 games difference gets you a bonus point. When overal points are equal, the result of match between the teams count.

Party -> Beers, Balls and a bit of Business

During and after the games of the Startup Padel Tour, the venue heats up and turns into a buzzing party.The guest list comprises a mix of founders, seasoned entrepreneurs, VC's, angel investors and tech influencers.Music, drinks, bites, more drinks and great conversations with amazing people.This is where the tech scene comes together right before TNW Conference. Whether your trade is SaaS or Web3, you'll meet your peers here.Want to join? Ping Patrick or Robert Jan for a registration link.

The Startup Padel Tour is a true collaboration between the organisers and the sponsors.Not only you'll be co-host of the padel tournament, but also the party afterwards. This is an ideal opportunity for companies who want to do something cool during large tech events like TNW and WebSummit, but don't want the hassle of organising their own side-event.We bring in the vibe, great people and create memories the last.We reinvest the funds into the event (we're not aiming to make a profit), so the more partners, the merrier.Want to take part? Ping Patrick or Robert Jan to schedule a call.